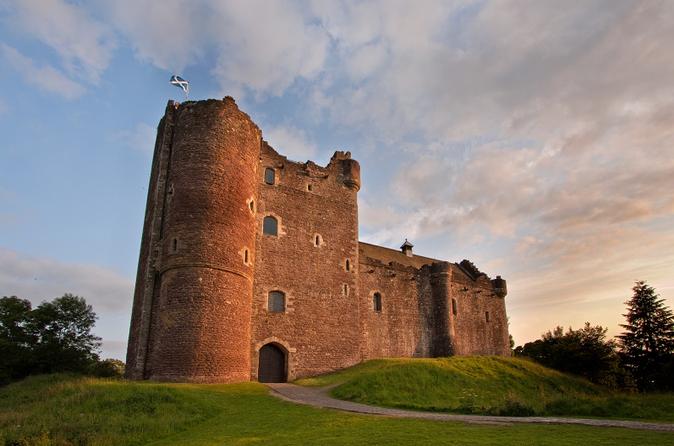 Your tour departs at 0830 from 266 George Street, Glasgow. Your Driver-Guide will greet you warmly, explain the route for the day, and begin your journey north to our first stop, the magnificent Doune Castle*. Doune was the setting for Outlander's Clan MacKenzie. Here we will stop for time to explore the Castle and its grounds, before we continue onwards.

A short while later we will come to Deanston Distillery; a small whisky distillery near Stirling. We pause here for refreshments, grab a tea or a coffee, before we journey on to the Wallace Monument. We stop here for pictures of the towering stone testimonial to the Scottish legend William Wallace.

After the Wallace Monument, we continue on to the Royal Burgh of Culross. This quaint village was used as Claire's herb garden. It's tiny cobbled streets and ancient buildings make it arguably the best example of 17th Century life in Scotland. You will have time here to see Claire's wee garden, and also take a walk to the Mercat Cross used in Outlander's Cranesmuir Village.

After Culross, we travel on to the country home of Callendar House. The house's kitchen was the set of the Duke of Sandringham's kitchen; spend time here to enjoy a bite to eat, take in the scenery and as the house is now a museum, learn how the Scots lived in the 14th Century!

From Callendar House, we travel on to the Royal Burgh of Linlithgow for Linlithgow Palace. The Palace was used as Outlander's 'Wentworth Prison'. You will have time to explore the palace, which was used as a relaxing retreat for the British Royal Family on journeys between Edinburgh and Stirling. Alternatively, explore the small town of Linlithgow, enjoy refreshments before we journey onwards.

After Linlithgow, we make our final stop of the day at Blackness Castle; set of the Headquarters of Outlander's Black Jack Randall. The castle hugs the coast and makes for spectacular photos! We briefly stop here before we return to Glasgow, where our Outlander tour ends.